Ever since I was a young girl, I had always been interested in TV shows. Yes, it can be time consuming, but it has always helped me relax and take a break from reality. After all, that is what you’re doing, you’re participating in someone else’s reality and watching their lives play out before your eyes. My sister and I certainly build our relationship and friendship around watching T.V. shows together, it was our way of bonding. Of course she always got a head of me since she had more free time on her hands. Throughout the years, I can honestly say I have learned so much from a wide variety of characters, and the majority of them have shaped the way I live today. My favorite is Meredith Gray from Grey’s Anatomy, she is a strong resilient woman, however, not all female characters are portrayed this way. A pattern that I have noticed throughout social media and the film industry is that Slavic women are often misrepresented in popular culture, particularly T.V shows, and the characteristics often assigned to these characters are negative ones. The character of a Slavic woman is very stereotypical and can lead to an over generalization of the entire group of females.

After some extensive research, I realized that I am not the Slavic woman that the media displays us to be. One of the sources that immediately came up to mind is a show called Jane the Virgin. The character I am referring to is Yael Grobglas. She is originally from Czech Republic. This character is perfect example because she perfectly portrays what the media sees Slavic to be, which is completely misleading. In this show, her character is lying, jealous, and deceiving, manipulative. For example, in one of the episodes she purposely inseminated herself with her ex husband’s sperm, she did this because she wanted to restore their marriage and she thought that if she had his child he would want her back in her life. Her character is very jealous and manipulative. Yael did this without thinking about the consequences and without consent. She proceeded with her own desires and wants. Throughout the show she lies about murders that people have committed and even helps cover up evidence. This behavior is a pattern that I’ve noticed of her character throughout the show. Despite her mistakes, Petra has a change of heart. 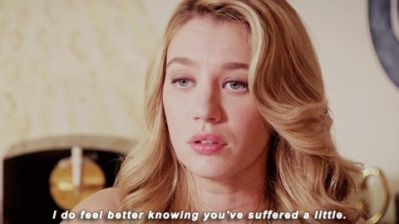 The source that I have selected summarizes and gives a better description of what happened at this specific Mother’s Day event in the show. I choose this particular event because it is a turning point for this character Petra, “Yael Grobglas is doing strong work making her a captivating addition to the cast by positioning her as an extreme contrast to her twin sister.” She puts all of her selfishness aside and creates a special brunch for her friends and family, something that is very unexpected of her because of her relationship with each of the individuals. She surprises everyone with her commitment to make these relationships work and reunited all of the people that truly have a great impact on her life. This comes to show that the core of a Slavic woman’s character is loving, enduring, and forgiving. The media often does not show this viewpoint, which is why Petra (Grobglas) is such a great character, she displays both the positive and negative characteristics of a Slavic woman.

This scene in the show is a turning point for Petra, she was never one to show personal interest and concern for her friends and family. Her character was emotionless and cold. Nonetheless, the young lady has transformed and evolved. This change doesn’t happen overnight, it happened throughout several episodes, I think her turning point was when she makes the effort to restore her family and truly forgive. 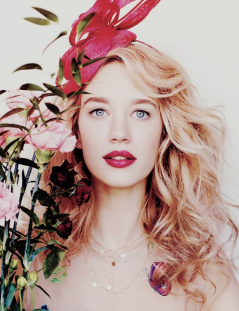 According to an article that I’ve research called, Way to Russia, written by Dmitry Paranyukshkin, and published on January 30, 2015, he talks about three main points, the environment, statistics and sexual desire for Russian women. A Russian girl’s character is shaped by her environment. Most of Russian girls live/lived in an environment that is no where near friendly, its often aggressive, manipulative, it full of lies, and drama. So like anyone, they develop an attitude in order to protect themselves. Throughout the media I have noticed that Russian women are typically used for sex, or sexual desire, this article says that “on average people search for the “Russian Girls” about 1 million times a month. We also see that most of the searches occur in the context of “dating” and “sexy”.” This furthers supports may claim that more often Russian females are looked at as objects of sexual desire. For example, in the movie Saint Vincent, Naomi Watts plays a Slavic prostitute.

Prostitution is a misleading identity in the Slavic community. I personally don’t know anyone that is a prostitute or has ever been one, the media makes it seem as though they are common. A lot of our Slavic mothers, sisters, and daughters are home makers, business owners, entrepreneurs, musicians. This perspective needs to be uncovered in popular culture. I come from a Slavic community and background and I can say with confidence that being a Slavic is amazing, the food, the culture, the traditions. We are very family oriented and protect our people, we carry traditions from generation to generation especially when it comes down to homemade recipes. I think I can speak for most Slavic woman when I say that our character is honest, it may be rude at times but we don’t like to sugar coat the truth. Another character trait that I find common the Slavic community is the work ethic. I constantly see this in my parents, they are always available for opportunities in their businesses, I am proud to say that I have inherited that work ethic and always look forward to improving and growing.

Popular culture can be interesting; it seems as though it only focuses on the negative stereotypes. I would love to see more honest Slavic characters in the T.V. show and film industry.

Throughout this term I have learned how to use the PSU library effectively. How to narrow down my searches and dig for the information that only relates to me. I’ve known how to use the library prior to this class, however, since we had to do so much research for primary and secondary sources, the PSU library Guide has been a life savor.

A learning moment for me has been Week 9- Media Literacy. The course blog for this week was really interesting and informative, especially in the text, Media Literacy: An Alternative to Censorship. This showed me a new perspective into the literacy world and how important it is for everyone to have this skill in today’s society.