No one likes being called a nerd. I have been identified as a geek or a nerd  for a long time because I like to play video games. I also relate to the geeky characters on TV shows. That is the reason why I chose to write this paper: I wanted to see how people like me are represented across the popular culture. Geeks and nerds have a long history of negative stereotypes in popular culture. The individual of a group who is familiar with technology and fantasy content is often generalized into having poor social skills and cowardly behavior. This stereotype can be seen throughout popular culture, especially in older depictions. New and old shows still maintain the stigmas I described, such as The Big Bang Theory, The IT Crowd, and Parks and Recreation. Each of these shows depicts a nerd with a variety of the traits I described to varying degrees. Some shows depict these traits in more destructive manors than others. In my opinion it is important to make these issues known as such representation can lead to bullying in schools.

Source one: The IT Crowd

I’d first like to dive into The IT Crowd, which far and away portrayed the most stereotypically possible depiction of nerds. The main and typically nerdy characters, Roy and Moss, are repeatedly portrayed as having a much lower social status than that of anyone else in the office. The Introduction to the show shows them bugging people about their computers (doing their job) and are consequently dropped down a trap door to the basement, where their office is located. That sort of gag is exactly the type of stereotype that I think should be far in the past regarding nerds. I think it’s damaging to self-esteem if someone who shares similar interests to you is mistreated constantly in popular culture.  Furthermore, in one episode a female co-worker comes to the basement to physically beat Roy over a work-related argument. The behavior is tolerated and the catalyst for the third main character, Jen, joining them in the basement, as the ‘public relations manager’ (to help them get along with their co-workers). I mention all this because it not only demonstrates the severe lack of respect for nerds, but also touches on another stereotype which is their lack of social skills with Women. After that violent situation, the women who beats Roy leaves and Roy asks whether anyone got her number, indicating romantic interest. I think this is a bit much because it implies that nerds are so desperate for socializing with the opposite gender that they are willing to look past violent tendencies and behavior. I would argue that this is an even worse portrayal because even if it is against a man, normalized violence isn’t appropriate. In that scene you can see Jen, not a nerd, casually watch the events unfold and eventually step in to diffuse the situation when she wanted to ask the woman where she bought such nice shoes. I think this further reinforces that nerds are portrayed as not being able to adequately socialize with others and that non-nerds have to step in to help.

The Big Bang theory is the most popular artifact that stars a set of nerds. The show features a set of scientist friends who just live a nerdy lifestyle. This show is largely hated by real life nerds because of the way it uses nerd culture as its source of humor. Each nerdy cast member has the typical traits of being a nerd to an extreme end. Raj, for instance, can’t talk to women unless he is drunk and Sheldon has extreme social dysfunctionality with virtually everyone he speaks to. The main reason it’s disliked by so many people is that show is based off making fun of nerd culture. The activities the characters participate in are close to realistic but off enough that’s it’s mostly just insulting. A character will just say their mom is sending them their old N64 gaming console and the laugh track will play. Why is that funny? Because it’s something a nerd would do. It’s not particularly clever or poking fun at something extremely weird a nerd might do. It’s just taking a typical aspect of nerd culture, playing an old console, and portraying it as if it’s some hilariously ludicrous activity.

One similarity I noticed between the IT Crowd and The Big Bang Theory is the germaphobia and extreme lack of social skills that Sheldon and Moss have. Sheldon has a superiority complex over everyone he meets. Sheldon will say something such as “Oh, please, if I don’t know, you don’t know.” This sort of interaction demonstrates a detrimental inability to form friendships with others. He behaves this way even towards his friends. Similarly, Moss has next to no social instincts. He will routinely think someone is talking to him when they’re not. Someone will ask him a sarcastic question meant to poke fun at him and he will attempt to attempt to google the answer. Social queues just go over his head. Sheldon boasts that he was tested for Autism as a child and the doctor cleared him. It’s this sort of joke that perpetuates the stereotype that nerds struggle to socialize or form lasting relationships with those around them.

Another similarity that IT Crowd and the Big Bang Theory has is how physical appearance of nerds is very stereotypical. I would like to compare two main characters Moss from The IT Crowd and Leonard from The Big Bang Theory. They both have thick glasses and messy hair, they dress similarly, they appear to be physically unfit. It is very common for the appearance of nerds to be that way across the popular culture. 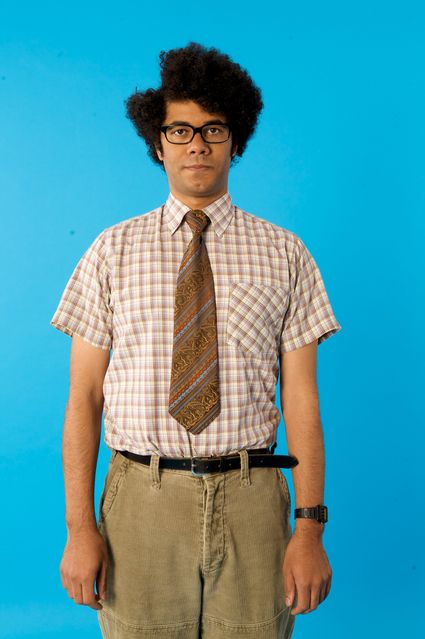 In contrast to my previous examples, I think the TV show Parks and Recreation portrays nerds in a better manor. Ben Wyatt is the resident nerd on that show, as is demonstrated by his deep appreciation for Game of Thrones, accounting puns, and creating the board game ‘Cones of Dunshire.’ He presents a character that clearly has nerdy interests but just in a casual way that doesn’t take away from his delightful and funny characteristics. Every now and then there’s a joke about him criticizing J.J. Abrams’ take on Star Trek but it’s far from what defines his character. I think this presents nerds in a more positive manner because he’s never presented as further down on the totem pole due to being a part of nerd culture, and he doesn’t have any severe issues with social interactions, romantic or otherwise. He just has funny quirks that everyone can appreciate in a normal way. For instance, his ‘Cones of Dunshire’ game is a huge success and becomes a beloved fake game by fans of the show. In another show the joke would have just been that he plays Dungeons and Dragons and queue the laugh track. His great humor, selflessness, and good nature are what define him.

Secondary source: The Nerd as the Other

A professor in the university of Vienna Jasmin Engelhart compares the representation of nerd culture in the media to the freak shows in the Victorian century. People liked to watch freak shows because they were fascinated with looking at people that act differently and they could compare their lives to the lives of the `abnormal`. Just like the people in the freak shows nerds in the media are represented as `them`or `the others`. This is usually achieved by comparing a nerd with a completely different person, for example a beautiful woman who knows nothing about science but has good social skills.  To look at this further the professor analysed the show Big Bang Theory just like I did. She suggested that nerds are represented that way so that people watching could look at them and say `I am so glad that is not me`. For example, even though Sheldon is so talented in his field he has a lot of difficulties in his everyday life that many people do not face. To make this contrast even larger he is compared to a woman who is seen as a `the norm`. So Jasmin Engelhart makes a conclusion that even though freak shows would be seen as morally wrong today, they still exist but their format is transformed and they target different kinds of people as being `freaks`.

I had a significant learning moment during the week 2 discussions when discussing how single mothers are portrayed in films and treated in reality. Andrea shared an article by Charlotte Ashlock that told a story about how parents wouldn’t let their children play with a certain girl because her parents were going through a divorce. I was just taken back by this story because divorce is just such a common occurrence that it’s hard to imagine someone being treated differently for going through it. This relates to my healthy communities class because neighbors getting along is an important part of forming a healthy neighborhood. This type of behavior goes against that principle and is just destructive. From here on out I’ll be more open to the idea that people might segregate themselves from others based on certain characteristics, even if I’d normally expect better of people.

Another learning moment that comes to mind is the report from Stanford about evaluating information online. I spend a lot of time online looking at articles and images shared by thousands of anonymous strangers. That behavior was highlighted in the report when they used the example of sharing an image of disfigured flowers with the title, “Fukushima Nuclear Flowers.” I knew it wasn’t terribly strong evidence since the image could have been taken anywhere. But I didn’t even consider that the person who shared the article was completely anonymous, giving them absolutely no credibility. I’m just so used to everyone being anonymous that it doesn’t even register for me anymore, which is concerning. This relates to my other classes because I often reference sources that I might put an enormous amount of effort to certify. From here on out I’ll be more careful about where and who my sources come from.

All in all, some artifacts in popular culture depict traditionally nerdy characters in a destructive manor while a minority do so in a positive manor. Many TV shows also often create a very stereotypical appearance of the nerd characters. I think the negative stigmas, such as poor social skills and place in social hierarchy hinders those who identify with nerdy culture. If you’re going to present a nerdy character then make sure their identity revolves around more than that trait. A good example of positive representation is Ben Wyatt in Parks and Recreation because he has many more things that define him. So it is okay to make some jokes about extreme parts of nerdy behavior (i.e. correcting others about nerdy facts) but it’s not okay to make all nerdy behavior itself into a joke.

Engelhart, J. (2012). The Nerd as the Other: A case study on the representation of nerds in The Big Bang Theory and Beauty and the Geek.

8 thoughts on “Representation of Geeks in Popular Culture”