I'm 25, I live here in Portland and am at PSU earning my degree in communications with a minor in history!

With the upsurge of television cooking programs in the last two decades, a new real life sub culture has evolved. Popular culture has deemed this culture as “foodies.” Seeing as this group has emerged from the increased popularity of cooking programs, the majority of members who identify themselves as foodies say that their love of food and of cooking emerged from these television shows. As is typical of our society, we have seen a new “fad” or “trend” come forth and have focused purely on the strange outliers or extremists of that community and based our opinions on them. Foodies are largely seen as pretentious, snobby and out of touch with the real world. I consider myself a foodie and I am not any of those previously stated things.

To understand how foodies are wrongly portrayed in the media and misunderstood in our every day lives, we first have to define what pop culture says a foodie is. To define what a foodie is and to analyze how popular culture can manipulate it into having negative connotations, I’ll present two definitions of the same word. In the dictionary a foodie is defined as “a person keenly interested in food, especially in eating or cooking”. This is a relatively tame description compared to the popular online faux dictionary called Urban Dictionary. Two of Urban Dictionary’s most popular definitions of foodies are “A douchebag who likes food.” and “A fat kid pretentious enough to think up a special word to describe their desperate longing for anything to shove down their face. They’ll often claim to be “food enthusiasts” or to have “refined tastes,” but they’re usually lying”. As any one could tell from these popular sources, the jump from someone who likes food to a so called lying pretentious douche bag is a relatively short one. So who are the people who make up the majority in foodie culture?

Some people would say the vast majority of foodies would be likely to say something like this: “Can I crash on your couch? I just sublet my apartment to have dinner at Persay.” This statement was said in a popular YouTube video entitled “Shit That Foodies Say.” (http://www.youtube.com/watch?v=6-L9BHcxMmI). I think phrases like this one are what contribute to popular cultures idea of foodies being out of touch or snobs. I do not feel like I can relate at all to this statement and the notion of subletting my apartment to pay for a single meal. This YouTube video is obviously using extreme statements to garner a reaction from it’s viewers. As we know, sensationalistic headlines and statements are often used to attract attention. What I would argue is that this view is completely unrealistic and does not reflect my life or my choices, yet I’m considered a foodie as well. I don’t feel represented whatsoever when I hear these kinds of statements being said about foodies.

Regarding the economic issue surrounding foodies, supposedly most of us spend absurd amounts of money to eat well. This popular myth is for the majority of foodies, simply untrue. There are even books that debunk this myth that we are all spend thrifts.The book called, An Economist Gets Lunch, written by Tyler Cowen who is a leading economist, is a great example. 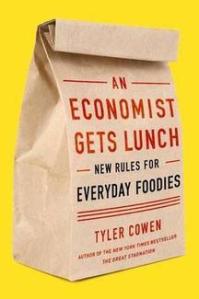 You can be on a budget and also make delicious, interesting and creative food choices.

The backlash was swift against this generally overwhelmingly positive force. A movement of mindful nutrition, joy in simple food and a movement that promotes passionate debate about food. I believe that the backlash against people who are interested and thrilled with food is a typical knee jerk reaction to anything popular that comes to the foreground of society’s conscious. From past experiences with trends or things that become popular very quickly, for every 5 people who like something and stay silent, you’re going to have one person vehemently apposed to it for a multitude of reasons. One of these people is Steven Poole who wrote an article for the guardian’s online site (http://www.theguardian.com/books/2012/sep/28/lets-start-foodie-backlash ). According to Mr. Poole, “ Western industrial civilization is eating itself stupid. You can’t watch cooking on TV or in front of your face, you can at least read about it. Vast swaths of the internet have been taken over by food bloggers who post photographs of what they have eaten from an edgy street stall or at an aspirational restaurant, and compose endlessly scrollable pseudo-erotic paeans to its stimulating effects.” I would not argue with that statement and in fact, I agree with the latter part. My argument is simply: so what? In this age of reality television, rapid consumerism and many empty hobbies that are without a positive outcome, why are we attacking something that helps our national economy, promotes local food consumption and glorifies people who are inventive and hard working?

I also observed popular culture subconsciously teaching us to self shame ourselves as foodies. There are many backhanded and passive aggressive phrases that are used in day to day life concerning foodies. One popular article from the New Yorker interviewed a woman who states this self blaming attitude accurately: “But it’s like when my boss says, ‘Oh, you’re such a foodie.’ I’m like, Oh God. When I hear the word foodie, I think of Yelp. I don’t want to be lumped in with Yelp.” This stereotyping and generalization is undoubtedly subconsciously shaming to those who call themselves foodies.

With all of the negativity surrounding foodie culture, I am still proud to say that I am one. Firstly because I know that I have not gained a so called snob attitude since fully realizing my love of food and cooking. Secondly because it has been nothing but a positive force in my life. I use cooking and food as an outlet, a time of mediation for myself. I get excited thinking about what I could make and whom I could serve it to. In my mind, cooking is just another way for me to nonverbally show someone how much I care for them. Unlike many popular portrayals of foodies, my world does not revolve around food but my life is made much better by it. Many, like Steven Poole, negatively liken foodie culture or the new culinary culture to an art form. I feel like it absolutely is. I’m not ashamed to say that food and cooking are the only ways I feel able to make something that is metaphorically full of emotion. I feel like the time I use to make a meal and the amount of effort I put into it, is directly correlated to how great I want the person I served it to to feel. I can neither paint, draw or write as well as I can create a meal and that meal has the same amount of inspiration and thought behind it that my writing would have. Why is popular culture condemning something that only a rare few people go to extremes on? I liken that statement to people’s attitudes towards tattoo’s or piercings for example. Many have taken both to extremes yet the vast majority of people who have tattoo’s or piercings are moderate, normal people. I hypothesis this is because the trend is a relatively new one and still forming it’s social identity.

In conclusion, I would say that I’ve learned from my own experiences that it’s incredibly important to read in between the lines of fads or trends. Are we as a society just looking at the outliers of a cultural trend because they attract the most attention? From my research on how foodies are treated in popular culture articles, videos and blogs I would say that overall, society as a whole, has not made the effort to delve deeper into the majority of moderate, thrifty and un-self absorbed foodies that make up the majority of the group. I would also state that it is a good thing that food is replacing other outdated art forms and that it gives another type of person the ability to be creative. I consider myself one of these people and wish I could see myself more accurately portrayed in popular culture.